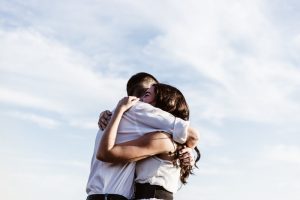 Starting in 2004, the National Institute of Mental Health (NIMH) conducted trials utilizing Ketamine intravenous infusions. They found “robust and rapid antidepressant effects” occurred with as little as one infusion. Amazingly for many of our patients, suicidal ideation and depressive symptoms improve shortly after starting a series of Ketamine infusions.

Ketamine works by a completely different mechanism of action than traditional oral anti-depressant medications. This may be why it will work for many who have tried every traditional “Big Pharma” variation of Prozac. Rather than targeting small neurotransmitters like dopamine, norepinephrine, or seretonin, Ketamine targets the largest neurotransmitter in the brain: Glutamate. Additionally, Ketamine has been shown to actually act to repair or regrow damaged neural synapses, actually fixing these broken nerve connections that underlie some mental health issues.

Similar to the NIMH trials, Desert Ketamine Clinic recommends an initial series of six infusions over a two-week period. These infusions are usually spaced out to ensure a day or two in-between each infusion. Following the initial treatment series, patients then enter the maintenance phase of treatment where they return as needed for single “booster” infusions. These single infusions usually follow a predictable pattern of frequency that varies from patient to patient. The positive effects may last 3 weeks to 3 months before a booster is required.

While not every patient experiences the same outcome, four out of five patients report significant improvement in their symptoms. This may be anywhere from moderate to complete remission of depressive manifestations. To date, there are no other medications that offer such a fast acting and as large of success rate as Ketamine. The only way to know if Ketamine therapy will work for you is to try it!

Please see our Ketamine Therapy section of this website for what to expect during an actual treatment.

Many of our depression patients also find significant benefit from NAD+ therapy. This important enzyme is thought to be largely depleted in those suffering from chronic depressive symptoms. After NAD+ infusions, patients report a significant improvement in energy levels, they are able to get out of bed and face the day. They report a better sleep/wake cycle, and an improved mood and outlook on their life. NAD+ can be administered as a stand-alone treatment or in conjunction with Ketamine.

Font Resize
Contrast
Accessibility by WAH
Call Us Text Us